OUR CODE ADVENT CALENDAR IS BACK! CAN YOU SPOT THE VULNERABILITY IN OUR DAILY CHALLENGES? Discover Now

The "build-wrapper-dump.json" file was found empty. (Project with mixed ObjC and Swift)

I’m facing a problem after running sonar-scanner. I’ve searched here topics related to my issue but solutions don’t seem apply to my case.

My problem seems to be the same as this post but I could not get enough information about the solution:

@Team , i resolved issue what i sent before mail, Now am getting results in sonar server. Please check screen-shot and update is it correct out-put or not. [Capture-sonar.PNG]

I am new to SonarQube and would like to ask for help from anyone here.

Btw, initially, it was working fine when scanning only for Swift as I forgot to include to scan Objective C files as well.

Which versions are you using (SonarQube, Scanner, Plugin, and any relevant extension)

What are you trying to achieve
I’m trying to scan my project with mixed objective c and swift languages.

What have you tried so far to achieve this

P.S. I had to cover some paths and remove project names due to privacy.

Update:
I got The main branch has no lines of code. warning/error after adding the following in my sonar-project.properties:

Can anyone help know what I did wrong or what I’m missing?

Before any further troubleshooting, I think it’s important that you address the version of the build wrapper you’re using.

Thanks for your reply!

Sorry, I wrote the wrong version I am using here.

I am not getting “build-wrapper-dump.json” file was found empty anymore.
However, I have another problem now. My project on SonarQube says my main branch doesn’t have lines of code:

My configs are still the same.

I don’t understand why and what I’m missing.

Do you scanner logs show that files are being indexed (and not somehow excluded)? Are any other branches being analyzed under this project?

I don’t think there’s anything being scanned. 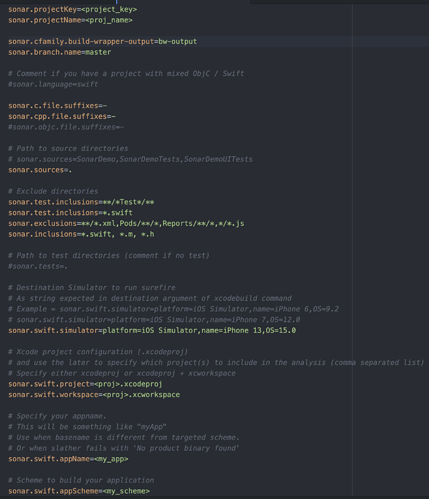 Your inclusion is configured to only analyze files in the directory from which the scan is launched. You would need to change it to sonar.inclusions=**/*.swift for example.

Thanks! That fix it!

Now I’m getting errors with commands i tried:

My understanding is build-wrapper-dump.json will be generated at the end of the build. Is it correct?