Yep, JavaSymbol was again an implementation class which has been dropped. Use Symbol.MethodSymbol instead (the same way you are using Symbol.TypeSymbol a few lines below). That would do the trick, and that should not have any adverse impact. If you can not use anymore some method, it was anyway wrong, because these methods should have never been used at first. Like I said earlier, you should have this ${java.plugin.version} property defined somewhere, or it would simply not work. SQ 7.9.…

So I upgraded the version and it is now in-sync with the sonar-java.jar version in the SQ distribution.

I’m still seeing the same issue however. It partially helped. This problem was impacting 3 projects. 2 of them are now not impacted. The last one is and it makes no sense to me. Same ‘exact’ issue.

CompilationUnitTreeImpl does not exist anywhere in code-base and am not casting to any impl classes.

Based on advice from the Q&A thread attached:
1.) I have confirmed that I am not casting to any impl classes (notes earlier in attached thread).
2.) Brought version of plugin in-sync with the Sonar-Java .jar in the SonarQube distribution.

One new thing I noticed:

Do you think this relates to the java-front end dependency? Where I need to set the scope to “provided”? 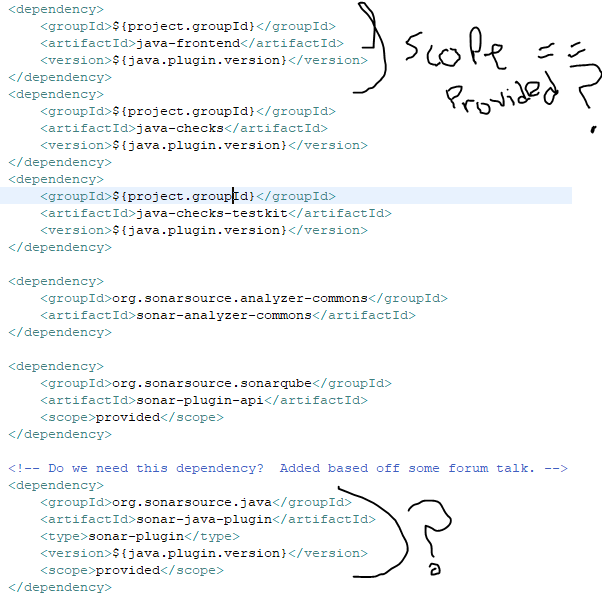 Is there anything else you can recommend? Without some guidance, I’m 100% stuck in place.

Thank you for your time. I really appreciate any guidance you could provide.